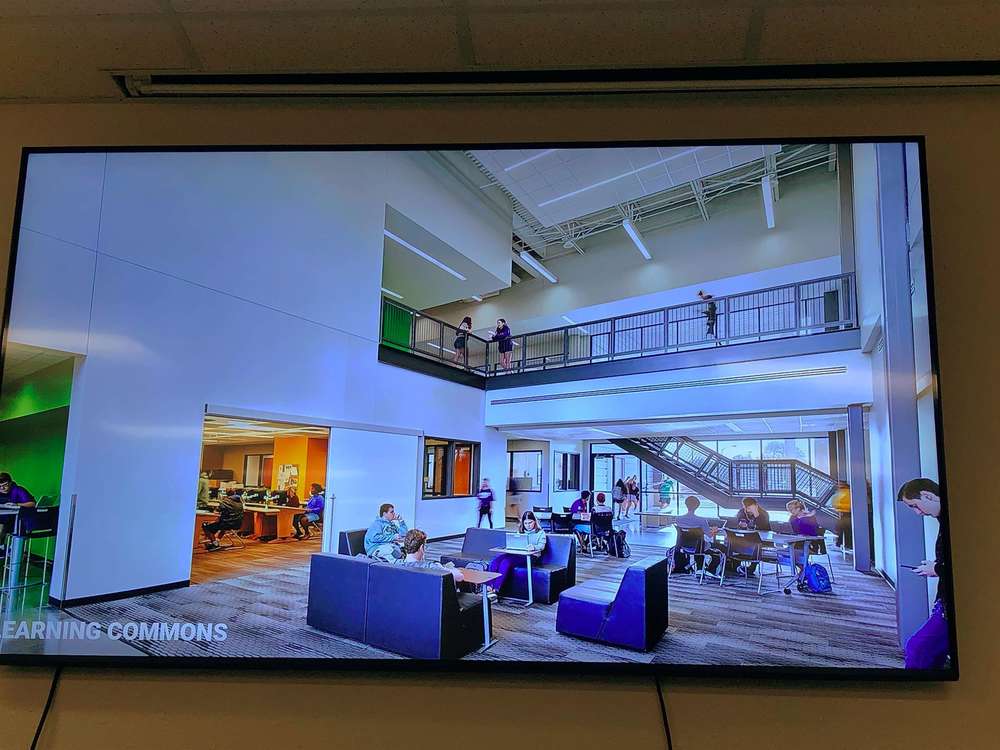 Keeping students and staff warm, safe and dry, as well as optimizing space in schools, continues to be at the top of list of priorities for an upcoming bond as the Hays USD 489 bond committees met again Tuesday.

No decisions have been made yet on what will be included in the bond or how much the bond will cost.

The community committee giving input on the bond again looked at examples of renovations of other schools that its architect, DLR, have completed to get ideas on what could be done in Hays.

The spaces in Hays are also smaller than what is recommended for the number of students that are using those spaces.

Kilpatrick also discussed creating environments that are individualized for each student.

"We want to give [our educators and learners] ownership in their facilities," he said. "These are community buildings that every community member is invested in. How can they be student-centered?"

Kilpatrick said something as simple as a chair that allows a student to comfortably touch their feet to the floor can empower a student.

He also encouraged the committee members to consider how they could inspire pride in their students and community through the school buildings.

Research also indicates inadequate heating or cooling is the No. 1 hindrance to student success, Kilpatrick said.

"If it was 100 degrees in here, we would probably be all outside here right now," he said. "We would not be listening to me talk."

Issues with heating and cooling have been problems across the district for years. Roosevelt Elementary School's HVAC system was replaced this summer. The district has a multi-million project in the works to replace the HVAC system for Hays High. That two-year project is supposed to start this summer.

Teachers have expressed concerns about students at the middle school losing learning time because they are bused out of the school for electives, said Marilyn Denison, DLR K-12 design leader and former teacher.

The students are bused in part because there isn't space in the school to offer more electives. They are losing 15 percent of their learning day transitioning between classes.

Fixing the space issue would cut that transition time in half, Kilpatrick said.

The students are also in large groups for lecture. Teachers said they would like to have students work in more small groups in which they can collaborate and work on hands-on activities.

High school teachers also said they wanted to have more space to allow their students to work in small groups.

The teachers, administrators and community group will soon come together to start talking about more concrete ideas for the bond.

"We've got two separate groups that are about to converge, but the message is the same," Kilpatrick said. "From your perspective, the spaces that you want to see, the creativity and flexibility and adaptability and inclusiveness is exactly in line with the teaching and learning our educational team is looking at."

The DLR representatives shared some examples of renovations that were completed in 2018 at Salina South and Salina Central high schools. The Salina bond was $110.7 million bond issue. It included improvements at both high schools plus addressed safety and security, all-day kindergarten, career and technical education, and storm shelters at all the schools.

DLR also showed examples of a middle school and elementary school that it recently renovated.

The district has yet to decide which schools will be included in the bond.

The bond committee will meet with its bond counsel at its next meeting and will begin to discuss bond financing.

A USD 489 bond issue that failed in 2017 proposed a 30-year term. Some critics opposed that time frame. Committee members suggested it would be difficult for the community to accept a 30-year bond if it meant the district would need another bond before the first bond was paid for.

Sarah Wasinger, committee member, said the community has fallen out of the habitat of paying for bonds.

Luke Oborny, committe member, said the community is going to pay either way.

"Everybody says let's do shorter bonds, but in five bonds, you are going to have to start over. It's a lease for the rest of your days. Is that what you want to do?" he said.

A committee member said he thought many residents misunderstood what their cost for the last bond would have been. Oborny said it would have cost him about $320 a year. However, some residents incorrectly thought the bond was going to cost them thousands of dollars per year.

A committee member said the perception in the community is that the district is asking for a Lexus instead of a practical Chrysler.

"The misinformation piece is just huge in this," he said.

He also said he thought the issue of differed maintenance needs to be discussed.

Wasinger said all options need to be explored and the public needs to know the bond is the most efficient use of its money.

The district plans to do community polling, as well as have community meetings to discuss multiple bond options before a plan is proposed to the school board for a vote.

The next community bond meeting will be at 5:30 p.m., Oct. 27 at the Rockwell Administration Center.