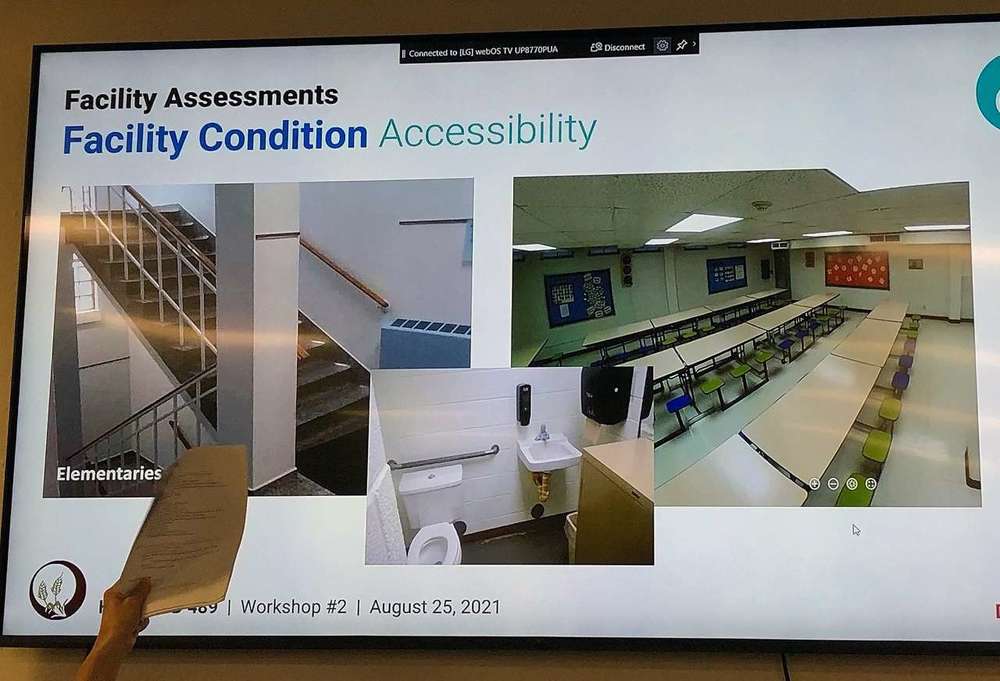 Every school except two in Hays USD 489 received Fs in a facilities evaluation by the district's architectural firm, DLR Group.

A community committee created to give recommendations to the Hays school board about a potential bond issue met Wednesday night with DLR representatives.

A group of administrators and a group of teachers met with DLR earlier in the day.

Most of the scores were close to a similar assessment that was done in 2017 during the last bond attempt.

Some scores rose slightly thanks to capital improvement projects that have been completed in recent years in the buildings. This included updated locks and new secure entrances at all the schools. Lights at all of the schools have been replaced with LEDs except at Wilson.

"He is not going to be able to fix those space problems that are all over."

Most schools have failing facilities

The schools were evaluated on two criteria — facility condition and educational environment.

Facility conditions dealt with issues, such as HVAC, accessibility, plumbing, roofs, and safety and security. Educational environment dealt with the sizes of the classrooms, space for student collaboration and project-based learning, and furniture and equipment.

Hays Middle School received a 70 for facility condition, but a 44 for educational environment.

Roosevelt Elementary School received a 62 percent for facility condition in part bolstered by a new heating and air-conditioning system that was installed this summer. It scored a 44 for the educational environment.

See a snapshot of the scores below and a more detailed assessment of the schools at the end of this story.

All of the elementary schools scored a three or lower out of five on accessibility. Lincoln scored a 1. Lincoln has stairs and no elevator. Its cafeteria is also in the basement.

Many of the district's restrooms do not have grab bars or a turning radius adequate to turn a wheelchair.

"It's not fair," Pennington said. "That's an experience someone has to live every day."

She also showed a picture of a lunch table that had no space for a wheelchair to pull up to.

Westside, as well as Rockwell, with their multiple floors, are inaccessible to individuals who have mobility issues.

Many of the schools have old windows that are leaking, as well as doors that are rusting. The older single-pane windows are not well insulated and let in heat, cold and noise.

Ceilings are leaking as well. Teachers have reported ceiling tiles falling on students. Even if roofs are repaired, the mechanical systems above the tiles are failing, causing water to drip onto the tiles.

"There are a lot of condition issues," Pennington said. "Not everything can be addressed. It is all coming to a head because all of the buildings are kind of at their end of life."

Although the district has adopted technological advances, the schools are struggling to meet the power and connectivity needs of those upgrades, Pennington said.

Parts for the mechanical systems are difficult to purchase because they don't make them anymore, she said.

HHS has a new audio/visual lab, but it's next to the school's mechanical room. The students have to time their recording based on when the heating and cooling system kicks on and off.

"One teacher said it makes her sad that the kids know how the building is limiting them," Pennington said.

Hays Middle School is the only school in the district with a certified tornado shelter. Some of the schools have shelter spaces that are accessed via stairs, which means children who can't navigate the stairs have to be carried.

"The conditions in those spaces are subhuman," Pennington said. "They aren't adequate. In order to fit all of the kids, they have to go through tunnels and crawl under the piping to get all the kids down there.

"That's terrible. We need to be telling the community how bad the conditions are."

In the previous meetings of the bond committees, Stephanie Myer, DLR community engagement leader, said the schools' lack of adequate space came up over and over again.

All of the schools with the exception of Lincoln are overcapacity. Hays High School's enrollment is 905 students with a capacity of 862 students.

Enrollment will likely rise again next year as the eighth-grade class that will be coming into the school next fall is larger than the senior class that will be graduating in 2022, Chris Hipp, assistant superintendent of business services, said.

Pennigton said a high school would ideally operate at 76 to 89 percent capacity. High school and middle schools need more space because students are moving between classes.

Elementary school can operate closer to capacity, because most students remain in the same classroom most of the day.

Hays Middle School is operating at 105 percent capacity with 730 students in a space meant for 696.

Roosevelt is the only school that has optimum classroom space. HHS' typical classroom is 680 square feet, but the ideal class size for a high school is 850 square feet. HMS comes closer to meeting the classroom size requirements but does not meet standards for square feet per student because of the overcrowding.

Wilson, O'Loughlin and Lincoln all have classrooms that are 800 square feet or less, which is much lower than the recommended 900 square feet. Wilson and O'Loughlin are also dealing with overcrowding.

"There is so much movement that is happening in education that can't be done here because the facility is the way it is," Pennington said.

Pennington asked, "Do students look at their school and say, 'That's designed for me.'

"I think when you walk into these buildings, it's a different mentality. Schools are built differently. Yes, good learning happens in those places, but when the facility is in such disrepair, it's not the same learning experience that it was 30 years ago or 40 years ago or 50 years ago. You have a building in the district that's 96 years old.

"It's not the same, and I don't think we can make that statement anymore."

As the committee looked forward to its next meeting, it briefly discussed its priorities based on the report it heard Wednesday.