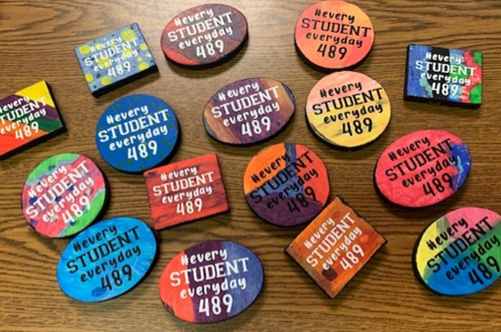 Officials trying to change the face of Westside school

Officials trying to change the face of Westside school

Lindy McDaniel, school principal and assistant director of special education, said Westside in the past was thought of as a program where "bad kids" went to school.

“For the longest time, I was one of those professionals that was saying, 'Why would you want your child to go to Westside? If they go to Westside, they’re only going to learn bad behavior.'

"But I really did a 180 flip when I started working with … our teachers at Westside. Some kids need something different.”

Westside, which is celebrating its 30th anniversary this year, is a collaboration between USD 489 and High Plains Mental Health — the first of its kind in the state. In the 1990s, Westside received a national recognition for being an innovative program.

School officials from across the state continue to seek information from the program as they attempt to assist students in their communities with mental health or behavior issues.

Younger students often struggle with coping with disappointment, self regulation and social skills. However, older students may be dealing with anxiety, depression or bipolar disorder.

Students at Westside have a normal academic schedule just as those children in the other USD 489 schools. However, in addition they have groups with High Plains staff twice a day and a social emotional skills session once a day.

The program has a therapist on staff. As needed, students have family therapy, case management and one-on-one therapy.

Transitioning to their home schools

School officials hope students will be able to build skills and transition back to their home schools. Research has shown the longer they are away from their home schools, the harder it is for them to go back, McDaniel said.

Forty-four percent of Westside students spend part of their school day in their home schools.

Even for some students for whom Westside is the optimum placement long term, McDaniel said the program's goal is to prepare students to enter the workforce and be productive members of the community after they leave school.

Mental health issues such as ADHD, anxiety depression or bipolar disorder may be issues for these students throughout their lives, said Adam Adams, Westside program coordinator and qualified mental health professional.

"These are life skills that we are not going to just use in the classroom setting, but everywhere," he said.

In an attempt to instill pride in the students, school officials are working on a school logo, and helping the students pick a school mascot, something Westside has not had in its 30-year history.

“When the kids come to that school, they feel defeated. They feel like they don’t belong to anything," McDaniel said.

She shared the story of a young child that was entering the Westside program.

"Mom was really nervous about the transition and rightfully so," McDaniel said. "We said let's think of this as an opportunity, so let's share with him ...

"'You know what, buddy, you have this wonderful opportunity to go learn skills to be a really good friend and a good student and you get to go back and share those with your other school.' "

The school has chosen green for its school color. Green is not represented in any of the other USD 489 schools or the special education cooperative. Green is also a color symbolizing mental health awareness.

“Westside completes the rainbow, because some kids just need a little alternative,” she said.

A tree is also being painting on a wall inside Westside. Students transitioning out of the program will be able to put their handprint on the tree.

Westside school is one of the oldest schools in the school district. In the last bond issue attempt, it was targeted for closure with the program moving into another building.

However, McDaniel said school officials have decided they need to do the best for the students at Westside now with the resources they have.

School officials wrote a grant to the USD 489 Foundation for Education Excellence to develop a school library.

Closets were replaced with lockers from the former Washington school to give the older students an experience closer to what they would have at Hays Middle or Hays High school.

"We are helping kids have similar experiences, so transitions back to their home schools are successful. We want them to be able to go into the school and go, 'Oh, I've done this before.' "

A new secure entrance is going to be installed this summer. Westside is one of the last schools at which this security feature is being added.

The district is also working on creating a staff lounge, which also does not exist at the school.

Yet, problems at the school remain. The aging windows in the school are leaky.

Westside will have a community garage sale this summer to raise money for new playground equipment.

Space continues to be an issue. The elementary students can't have a classroom upstairs because of state restrictions. The small classroom downstairs can be challenging when the noise level gets high or a child has a behavioral issue, Adams said.

When a child needs one-on-one attention, they are taken into the hallway, which is not optimal, Adams said.

Westside is using the Rockwell gym for some activities, but the school has to share the facility with occupational and physical therapy services.

Before the pandemic, the student were eating lunch at O'Loughlin Elementary School. However, this school year, the students had to eat lunch at Westside. By the time the elementary school kids get to eat, their food is cold.

Although eating lunch at O'Loughlin may be beneficial for the Westside elementary school class, McDaniel wondered how comfortable the middle school and high school students feel there.

Envisioning a future for Westside

McDaniel said she thought it would be more practical to have Westside classrooms attached to their home schools with one class at the high school, one at the middle school and one at an elementary school.

Superintendent Ron Wilson told the school board in a meeting April 12 he is continuing to work with the special education cooperative and High Plains Mental Health on shaping the future of the Westside program.

“It is the unknown shining star in our district,” Wilson said. “They don’t get the press or accolades they deserve. Staff has just been amazing in what they do every day and how they mold kids and develop kids and get them where they need to go. ...

“This is part of our core values of doing our best for all kids,”he said.